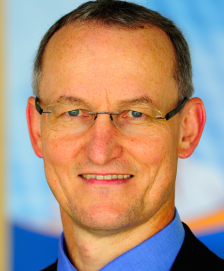 Gerhard Stryi-Hipp (Germany), head of energy policy and coordinator “Smart Energy Cities” at the Fraunhofer Institute for Solar Energy Systems ISE, is a physicist and an interdisciplinary expert on technologies, market development and policies in renewable energies and sustainable energy systems. From 1994 to 2008, he was managing director of the German Solar Industry Association BSW-Solar and its predecessors. He worked on market support policy for solar thermal and solar photovoltaic in Germany and Europe, on awareness campaigns, on quality assurance measures and technical innovations of the sector. He advocates for intensified research on renewable heating and cooling and was 2005 one of the initiators of the German and European Solar Thermal Technology Platforms. Since its foundation in 2008, he is president of the European Technology Platform on Renewable Heating and Cooling, which developed a vision, a research agenda and a roadmap for the sector. In 2009, Gerhard moved to Fraunhofer ISE, the largest solar research institute in Europe. He conducted projects on solar thermal energy systems, e.g. on Solar-Active-Houses, which are heated by more than 50% by solar thermal energy. Since 2012 he is focusing his work on sustainable energy systems especially for cities and communities. He is energy expert in the multi-disciplinary Fraunhofer project “Morgenstadt: City Insights”. With his team he is developing modelling tools to identify and design cost-effective sustainable energy systems for cities and regions. Based on these scenarios backwarding methods are used to derive roadmaps for the transformation of urban energy systems towards sustainability.