The California delegation comprising the County of Los Angeles and The Energy Coalition, together with the International Energy Advisory Council carried out the study tour on 24 to 27 September 2016. The study tour visited the Greater London Authority, Association for Decentralised Energy, King’s Cross, City of London Corporation and Repowering London.

Founded in 1850, Los Angeles County is the largest local government in the USA with a population of more than 10 million people, 25% of California’s population. It has 88 incorporated cities, including the City of Los Angeles, and many unincorporated areas. Its budget is $22.5 billion and has more than 120,000 employees. The County Office of Sustainability coordinates energy efficiency, conservation and sustainability programs to decrease utilization and maximise the efficient use of natural resources. Initiatives include climate change, renewable energy sources, energy efficiency, alternative fuels and transportation, land use planning and green building.

Founded more than 40 years ago The Energy Coalition (TEC) is a leading non-profit company in the USA energy field. TEC’s design and implementation portfolio includes:

The International Energy Advisory Council (IEAC) was established as a ‘not for profit’ company in the State of Pennsylvania, USA in 2014. The IEAC provides independent advice to governments and other organizations who want to implement decisive steps towards a 100% renewable energy future. Members of the IEAC have collectively advised more than 200 governments and organizations in 27 countries and more than 50 international and European governmental and non-governmental organizations. Members are based in France, Germany, Indonesia, Japan, Sweden, UK and the USA.

The initial meeting was held in Covent Garden on 25 September 2016 followed by continual discussions and de-briefings throughout the study tour.

The meetings and de-briefings focussed not only on decentralized energy projects in London but also projects in Sydney, Seoul and elsewhere as well as the differing utility and community renewable energy models, regulatory regimes and what energy policy, business and implementation models that California was not already undertaking that would be of benefit to California and in particular, the County of Los Angeles.

The Greater London Authority (GLA) consists of a directly elected Mayor of London and an elected 25-member London Assembly with scrutiny powers. It shares local government powers with 32 London Boroughs and the City of London Corporation. With a population of around 8.7 million people London’s energy consumption is responsible for around 40 million tonnes of greenhouse gas emissions a year. London is a growing city and its population is predicted to increase to 9.4 million people by 2021. London, as a large and wealthy world city, has taken the commitment to lead and show by example in taking action to avert catastrophic climate change. Successive Mayors of London have made addressing the causes of climate change one of their main priorities of London strategies and have set ambitious targets and policies for both mitigating and adapting to climate change.

The meeting was held at City Hall on 26 September 2016 and discussed the following:

London’s key energy and climate change policies in the London Plan are:

Although California is a world leader in energy and climate change mitigation policies there was much in the London Plan that would be of interest to California.

Founded in 1967, the Association for Decentralised Energy (ADE) is the UK’s peak industry body for decentralized energy. With over 100 members the ADE brings together interested parties from across the sector to develop a strong, dynamic and sustainable environment for a range of technologies including renewable energy, cogeneration, trigeneration, district heating networks, energy storage and demand side energy services, including demand response. The ADE also has European representation through its membership of Cogen Europe, Euroheat and Power and the Smart Energy Demand Coalition which allows the ADE to actively influence discussions about sustainable energy at European Union level.

The meeting was held at the ADE’s office on 26 September 2016 and discussed the following:

In Victorian times, King’s Cross was an important industrial heartland. But by the late 20th century, the area known as the railway lands had become a series of disused buildings, railway sidings, warehouses and contaminated land. Early development plans for redevelopment fell through, but the 1996 decision to move the Channel Tunnel Rail Link from Waterloo to St Pancras became the catalyst for change. The landowners – London & Continental Railways Ltd and Excel (now DHL) decided to develop the land. In 2001, Argent was selected as the development partner and gained outline planning permission in 2006. In 2008, Argent, London & Continental Railways and DHL formed a joint partnership: King’s Cross Central Limited Partnership which is now the single largest landowner at King’s Cross.

King’s Cross is Europe’s biggest city centre regeneration scheme and the largest piece of Central London to be developed, under single ownership, in the past 150 years. The 67-acre site comprises 25 new office buildings, 10 major new public buildings, restoration and refurbishment of 20 historic buildings, 1,900 new homes, 20 new streets, 10 new public parks and squares and 26 acres of open space, attracting 45,000 people who will live, work and study in the area. Development commenced in 2008 and in 2011 the University of Arts London moved to the site and parts of the development opened to the public for the first time. Since then, restaurants have opened, the Great Northern Hotel has been refurbished and re-opened and the first residents have moved in. Companies such as Google, Louis Vuitton, Universal Music and Havas are choosing to locate to the site.

In 2015, the UK Government and DHL sold their investment in the development to Australian Super, Australia’s largest superannuation/pension fund run only to profit members. The Fund manages more than $AUD 91 billion of member’s assets on behalf of more than 2 million members from across 210,000 businesses. King’s Cross is its first direct London investment and only its second in the UK.

The meeting and site visit was held at King’s Cross on 27 September 2016 and discussed the following:

As part of the planning consent the developer was required to comply with the energy hierarchy of the London Plan. Metropolitan King’s Cross Ltd (MKCL) was appointed as the energy services company or ESCO to design, finance, build and operate the decentralized energy network. Vital Energi won the contract from MKCL to design, supply and install the decentralized energy system and to operate and maintain the system over 25 years.

The focus for energy efficiency and decentralized energy at King’s Cross is the on-site Energy Centre. The centre houses trigeneration plant installed over three phases and is one of the largest of its kind in the UK. The trigeneration plant comprises combined heat and power, heat fired absorption chillers, thermal storage, back-up boilers and 2 km of pre-insulated district heating pipework. With the completion of Phase 3, the trigeneration plant, will provide 100% of the development’s heating and hot water needs, cooling or air conditioning to the office buildings and 80% of the development’s electricity. Renewable energy technologies such as solar PV have also been installed and the combined decentralized energy system will reduce greenhouse gas emissions by 50% below 2005 levels. Residents and businesses energy bills will also be reduced by on average 6%.

With the combination of energy efficiency and decentralized energy all homes comply with the Code for Sustainable Homes level 4 or above and each office is rated BREEAM “Excellent” or above by the Building Research Establishment Environmental Assessment Method. BREEAM is the world’s leading sustainability assessment method for master planning projects, infrastructure and buildings. It addresses a number of lifecycle stages such as new construction, refurbishment and in-use. Globally, there are more than 561,800 BREEAM certified developments, and almost 2.3 million buildings in 78 countries registered for assessment since it was first launched in 1990.

Building decentralized energy networks for new development is of keen interest in California and the County of Los Angeles in particular.

The City of London contains the historic centre and central business district of London. The City constituted most of London from its settlement by the Romans in the 1st century AD to the Middle Ages. Today, the City is only a tiny part of the metropolis of London and it now forms one of the 33 local authority districts of Greater London. The local authority for the City, namely the City of London Corporation is unique in the UK and has some unusual responsibilities for a local council such as having its own Police Authority and responsibilities and ownerships beyond its boundaries. The Corporation is headed by the Lord Mayor of the City of London, an office separate from (and much older than) the Mayor of London. 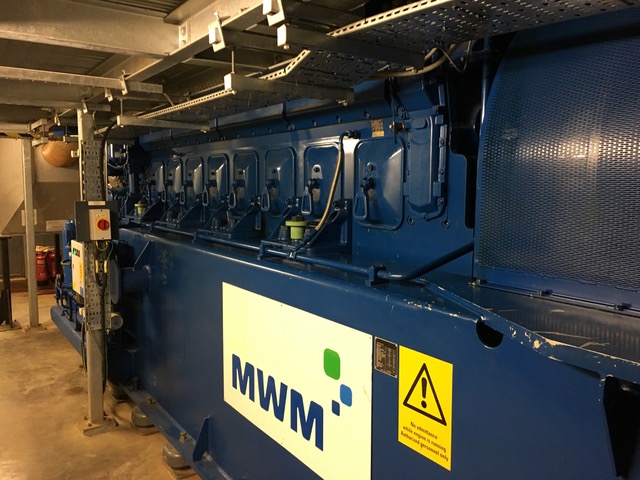 The meeting and site visit was held at the Citigen Energy Centre in Charterhouse Street on 27 September 2016 and discussed the following:

The trigeneration scheme was originally conceived by the City of London in the 1980’s. Following a competitive tender process Citigen (London) Ltd was selected as the energy services company or ESCO to design, finance, build, operate and maintain a trigeneration network serving City of London and commercial buildings within the City. A 25 year co-operation agreement between the City of London and Citigen forms the main legal contract, in addition to a number of separate energy supply agreements to individual sites and pipework licence agreements. Under the agreement, Citigen is responsible for the trigeneration energy centre, plant and decentralized energy networks and the City of London is responsible for providing support and planning advice, and encourages private customers to consider connecting to the decentralized energy network.

The trigeneration system became operational in 1993 and supplies 10 of the City’s properties, including Guildhall, Smithfield Market, Bastion House, London Central Markets and the Barbican Centre plus private customers such as sheltered housing. The trigeneration plant located in the old Port of London Authority building in Charterhouse Street comprises combined heat and power, heat fired absorption chillers, thermal storage, back-up boilers and 3.6 km of pre-insulated district heating and cooling pipework. The decentralized energy network extends through the north-western parts of the City with a branch running north to the London Borough of Islington. For ease of installation and access, the majority of the district heating and cooling pipework and electricity cables makes use of existing subways, basements and car parks with the rest buried underneath roads.

The trigeneration system reduces greenhouse gas emissions by 12,000 tonnes a year. Residents and businesses energy bills are also be reduced by 10%.

Building decentralized energy networks for existing development is of keen interest in California and the County of Los Angeles in particular. Of particular interest was the re-contracting and re-engineering of the original trigeneration system and the co-operation agreement with the City of London.

The meeting and site visit was held at the Roupell Park Estate Community Centre, Brixton on 27 September 2016 and discussed the following:

Four projects completed so far in the London Boroughs of Lambeth and Hackney, some of the most deprived areas in London. Another six projects in the course of development amounting to 1.5MWp of solar PV so far. Shares are £50 ($65) with a return on investment of 4%. Each shareholder has one vote regardless of the number of shares held. The design, execution and maintenance of each project includes internship opportunities for young people in finance, IT, technology, legal and marketing activities.

Repowering London raises investment from local communities plus grants from local authorities, etc, and returns 20% of the profits to the communities in the form of a community fund for energy efficiency measures, opportunities for young people living in the estates and community activities on the estate in addition to the return on investment for the estates shareholders. Local authorities also benefit from energy cost savings on landlord’s facilities.

Although community renewable energy is popular in California and a number of other states in the USA it was thought that Repowering London as a social housing community owned solar scheme was unique to London and would be of particular interest in California to enable social housing tenants to take advantage of California’s Solar Initiative.